We Are The Cat Welcomers ...

As some of you may know, my blog, Janie's Pocono Mountain Garden, is primarily about gardening, but life here in the Pocono Mountains is much more than that. It's always been about nature ... in all its forms.  And the feral cat population here is no exception.  It's a hard life for ferals here.   Let me share with you three personal stories  .... 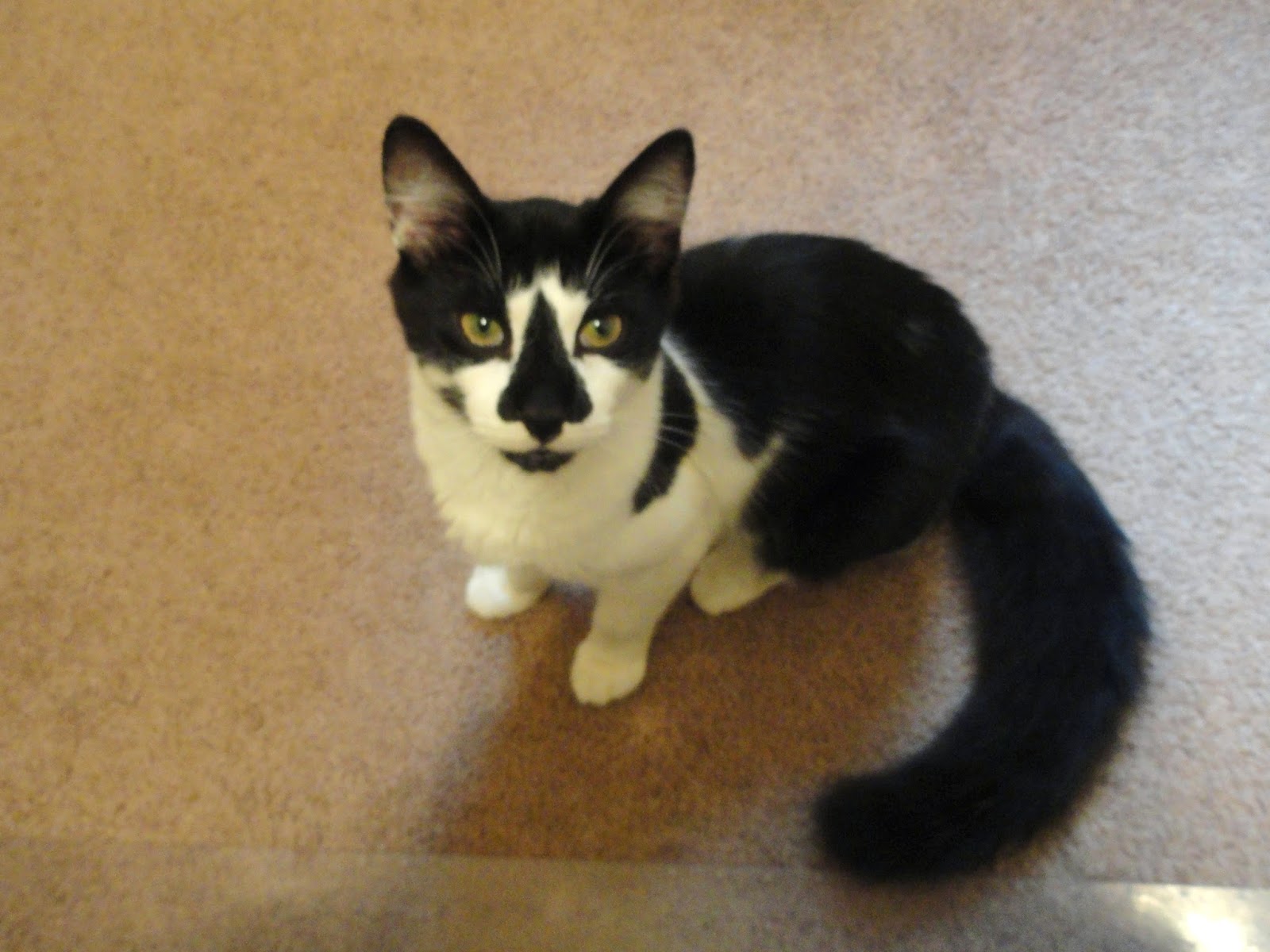 Pictured above is Patch. My hubby & I first met him in August 2013.  He had unexpectedly shown up at a friend's house about a week prior and decided to take up residence in her garage. Unfortunately, she would not be able to keep him. She called us. Knowing that we were always rescuing cats that needed homes, she asked if we might want him? We told her we'd be over later that evening to pick him up. When we arrived we got our first look at him. He was a small, scrawny black & white kitten about five months old. He had a black, spade-shape mark that ran down the length of his nose covering most of his face. If that wasn't impressive enough, he had a long, fuzzy black tail that was longer than the whole length of his body.  He was both the ugliest and cutest kitten we'd ever seen! 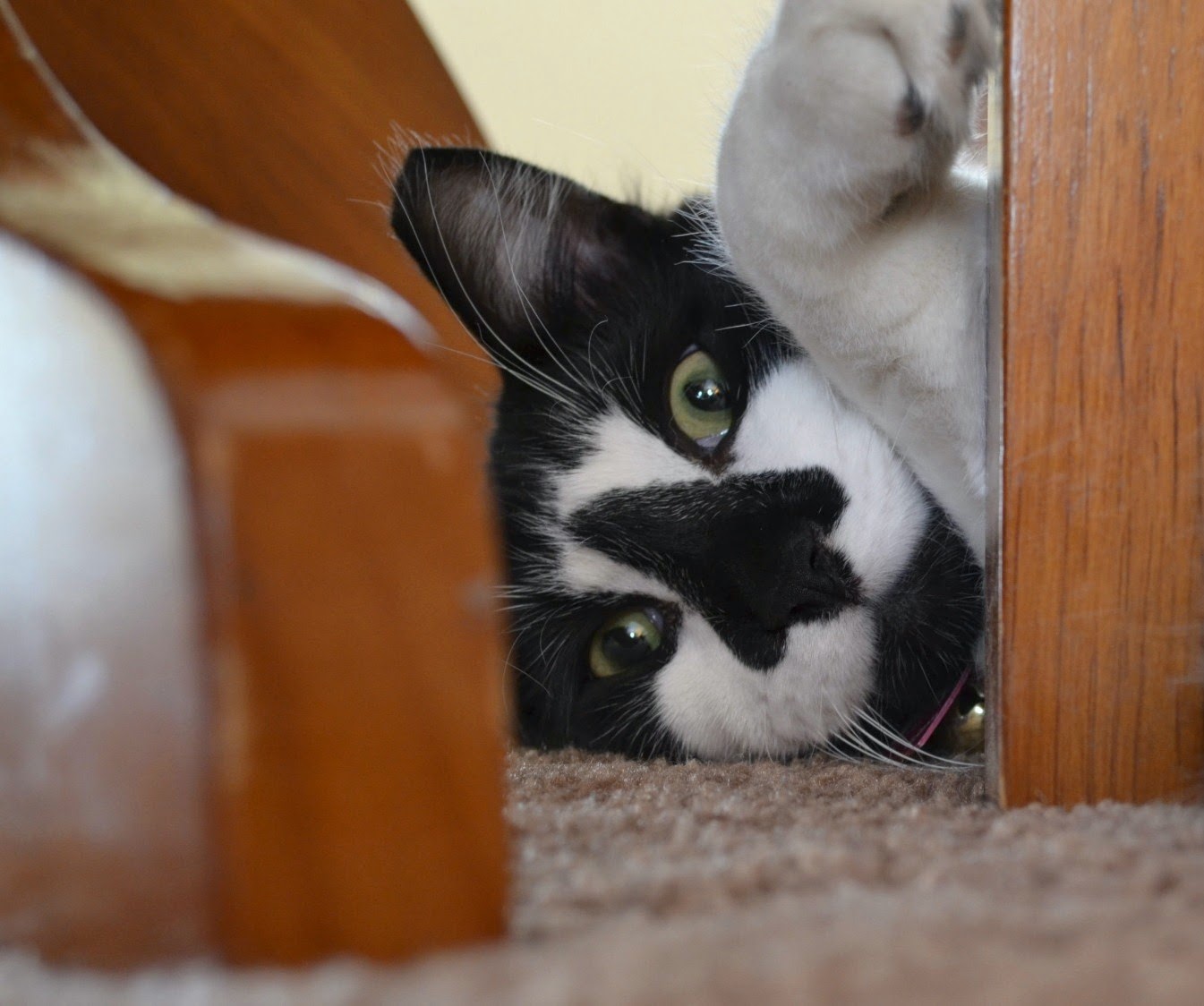 Patch settled in very quickly. He gained some weight, claimed the couch as his, and happily scattered his toys all over the house. About a month later, through our development's Feral Cat Program, we had him neutered and given rabies and distemper shots.  We are happy to say that Patch has been with us ever since.  He's sweet, very affectionate, and loves to have his belly rubbed.  He is a pure joy! 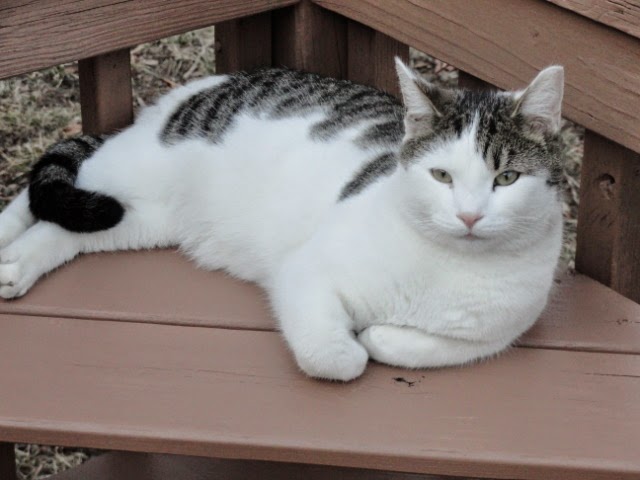 Now let me tell you about another rescue.  Bobcat.  He had entered our lives in October 2011.  At the time, the neighbors across the street were moving and were unable to bring him along. They asked us if we would be interested in taking care of him?  They told us he was an easy going, well behaved house cat. Softies that we were, we felt bad for him and decided we would give him a home. Things went well for the first few days.  Then by the end of the week, Bobcat began to show his true colors. 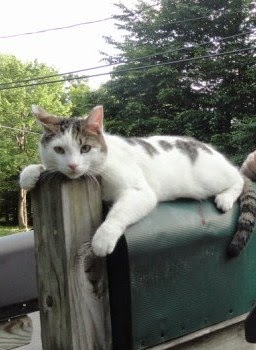 First off, Bobcat was not a house cat. Nor was he well behaved. We couldn't keep him off the tables and counters in the house.  At mealtimes, he had absolutely no qualms about stealing food right off the dinner table. We tried everything. Scolding him didn't work. The loud, rattling noise caused by shaking a can filled with some pennies didn't frighten him.  Even using a squirt bottle with water didn't dissuade him.  And the fact that he would dart out the door every chance he got only added to our frustration. We finally came to the decision to let him be just what he truly was ... an outdoor cat.  So, everyday thereafter, we fed him outside and left the shed door partially open so he could find shelter when the weather was bad.  Surprisingly, we all lived comfortably with this arrangement for the next two years.  Then in May 2013, Bobcat suddenly went missing. For weeks we diligently searched for him. Even some of the neighborhood kids helped in the search.  Sadly, we never found him.  Though the time we had with him wasn't very long, we knew we had given him the best possible life we could.  There are some that might say, "Oh, he was just a feral."  To us he was so much more.  Bobcat was free spirit who had left an indelible mark on our hearts. 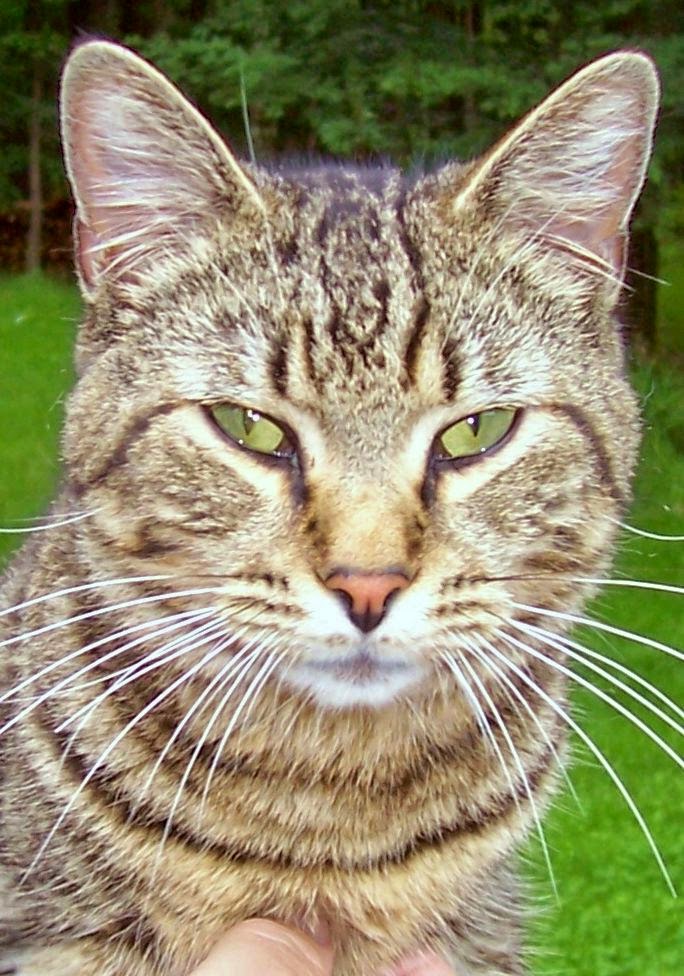 Last...  is Lucky's story.  It was late summer 2009 when we discovered two young male kittens living on the state gamelands behind the house where my hubby & I resided at the time.  Surprisingly, the two kittens (perhaps 7 or 8 months old) were not the least bit fearful of us and soon began visiting on a regular basis. Due to their very friendly behavior, we easily surmised that the cats had once probably shared a home with a family. We named one Lucky ... 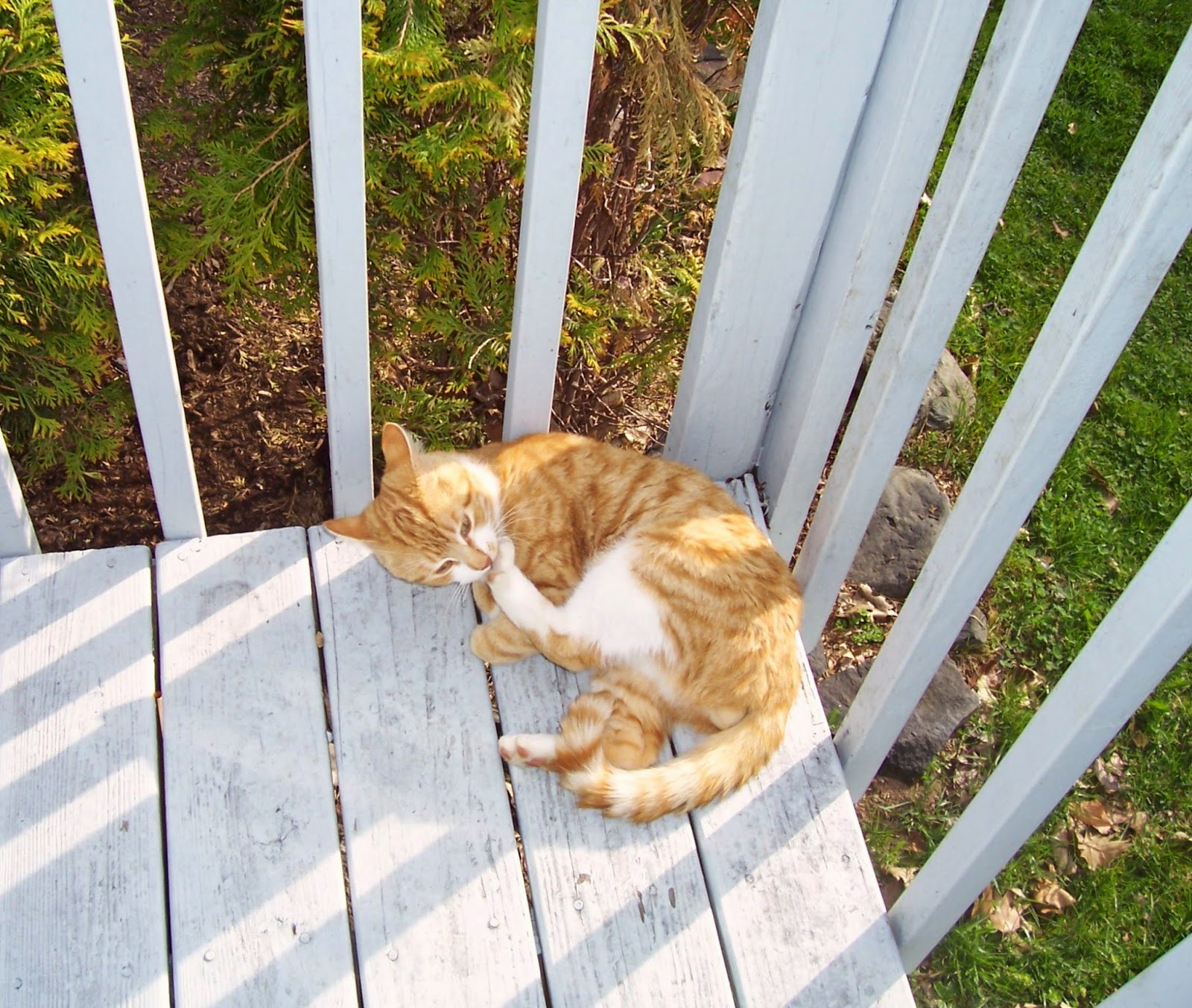 and the other, Goldie. They were indoor/outdoor cats, but Goldie was more so the wanderer. He particularly like to visit the house down the road. Eventually, he decided to make it his permanent home and we only saw him occasionally after that. 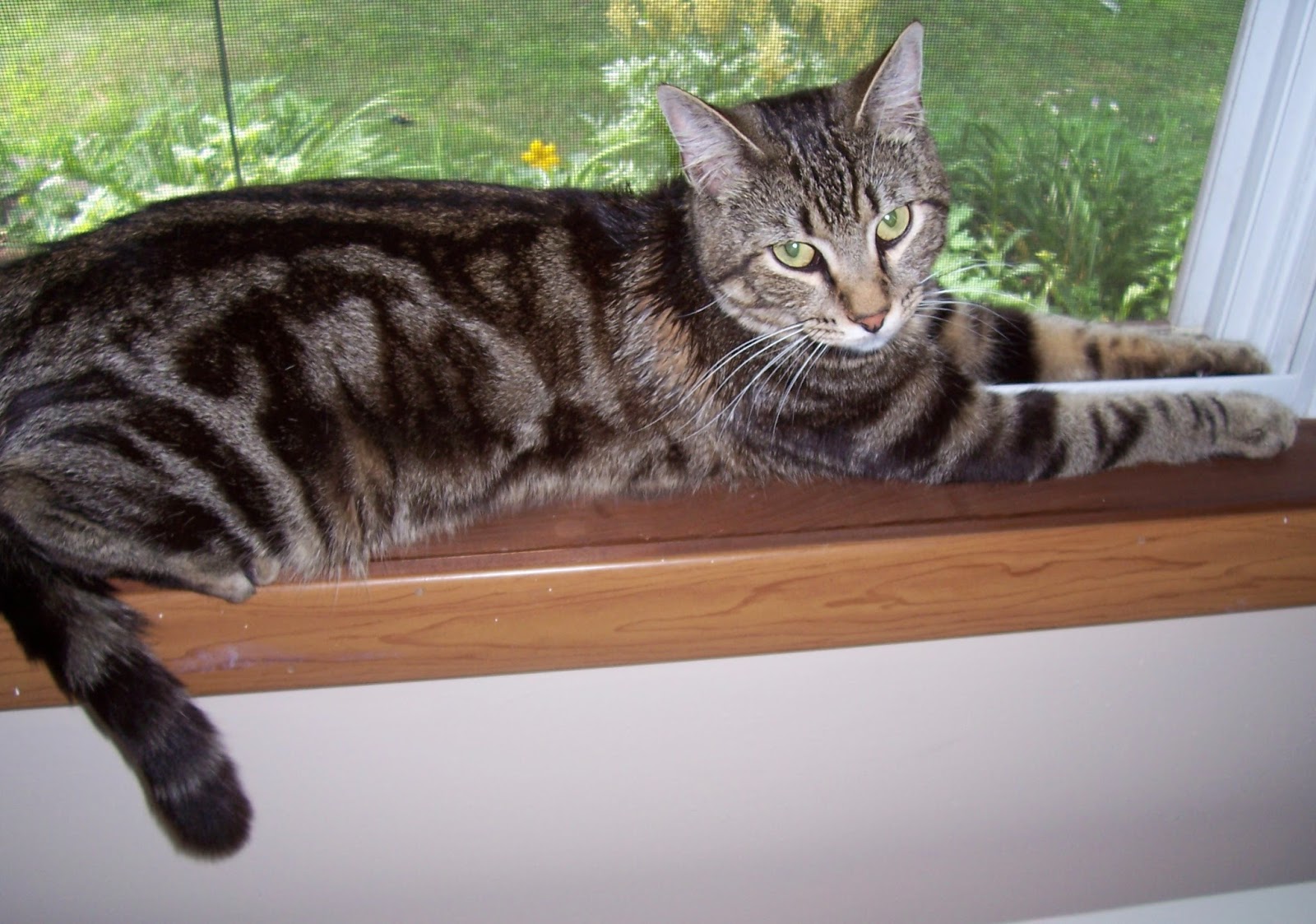 Lucky, on the other hand, preferred to stay around our house and yard. Soon, summer faded into fall, and then winter was upon us. Lucky loved being outdoors, but on a cold snowy night he was more than happy to snuggle up inside. Soon spring 2010 came,  and once again Lucky was outside just about all day long exploring the woods.  In late April a new neighbor, Tom, moved in next door.  Tom was a very friendly sort, and Lucky obviously knew it too.  He really took a liking to Tom. 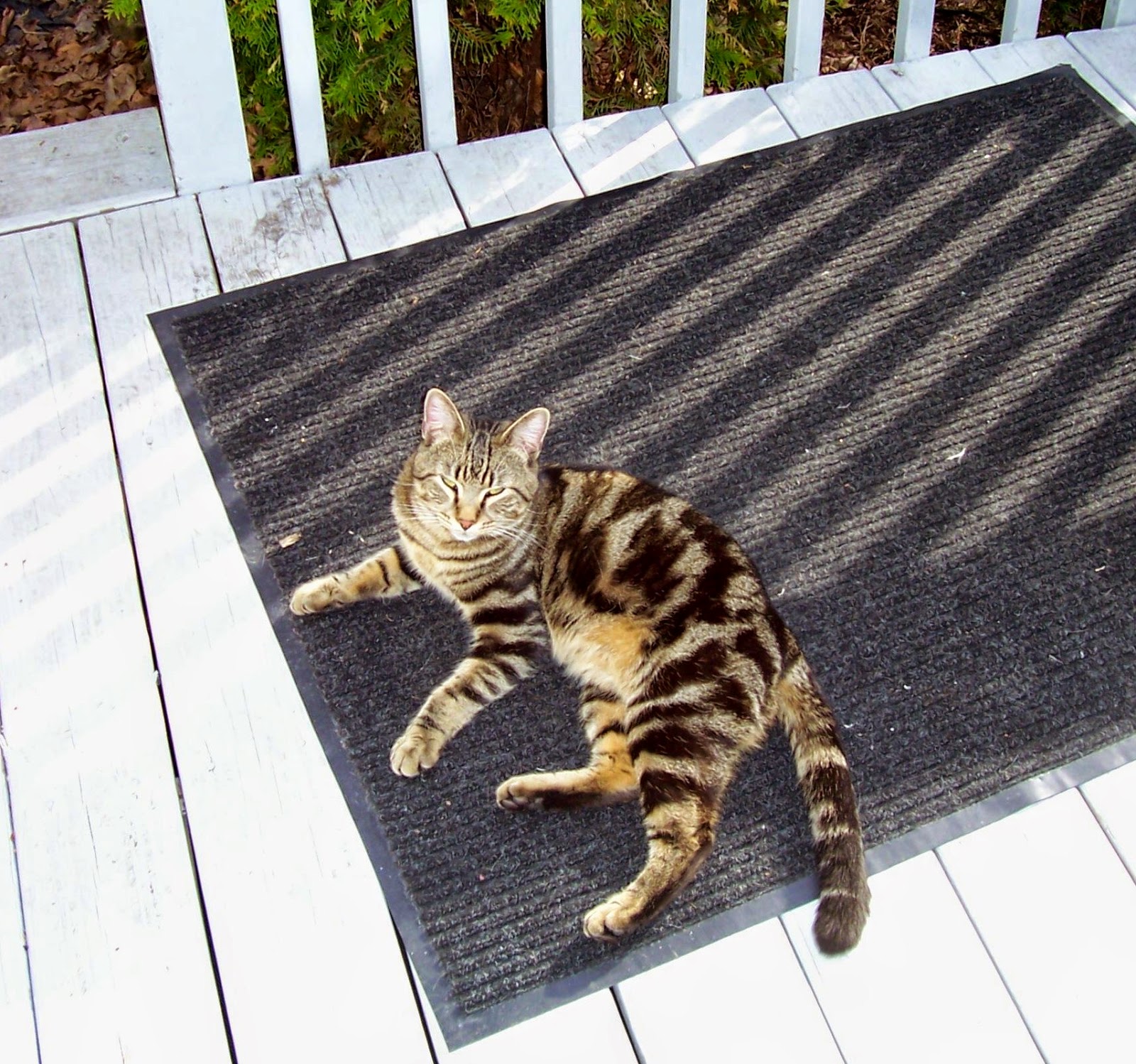 That summer we often would see Lucky sunning himself on Tom's back deck keeping our new neighbor company. We never really thought much about  it until ... 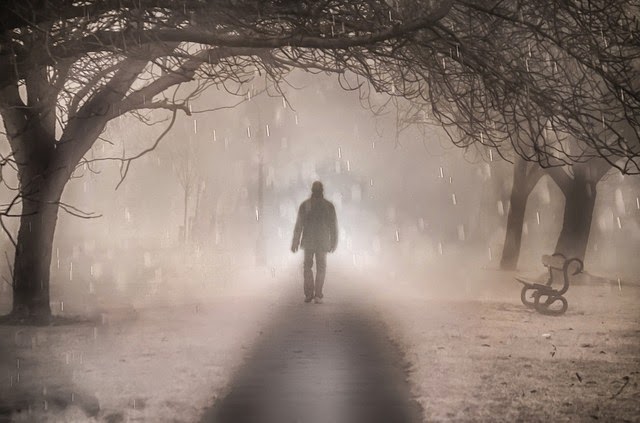 Tom knocked on our door early one rainy October morning with tragic news.  His only son had suddenly passed away. He was just 28.  We offered our heartfelt condolences and offered any help he might need. Lucky seemed to sense Tom's almost inconsolable grief and meowed softly as he brushed against him over and over as if trying to give him solace. When Tom left our house, Lucky followed right behind him.  From that day on, Lucky spent his days and nights with Tom.  He did pop over to see hubby and I ever so often to say "Hello"and  have his ears scratched, but then darted right back to Tom's house.

We firmly believe that things happen for a reason.  And it's all in God's plan. 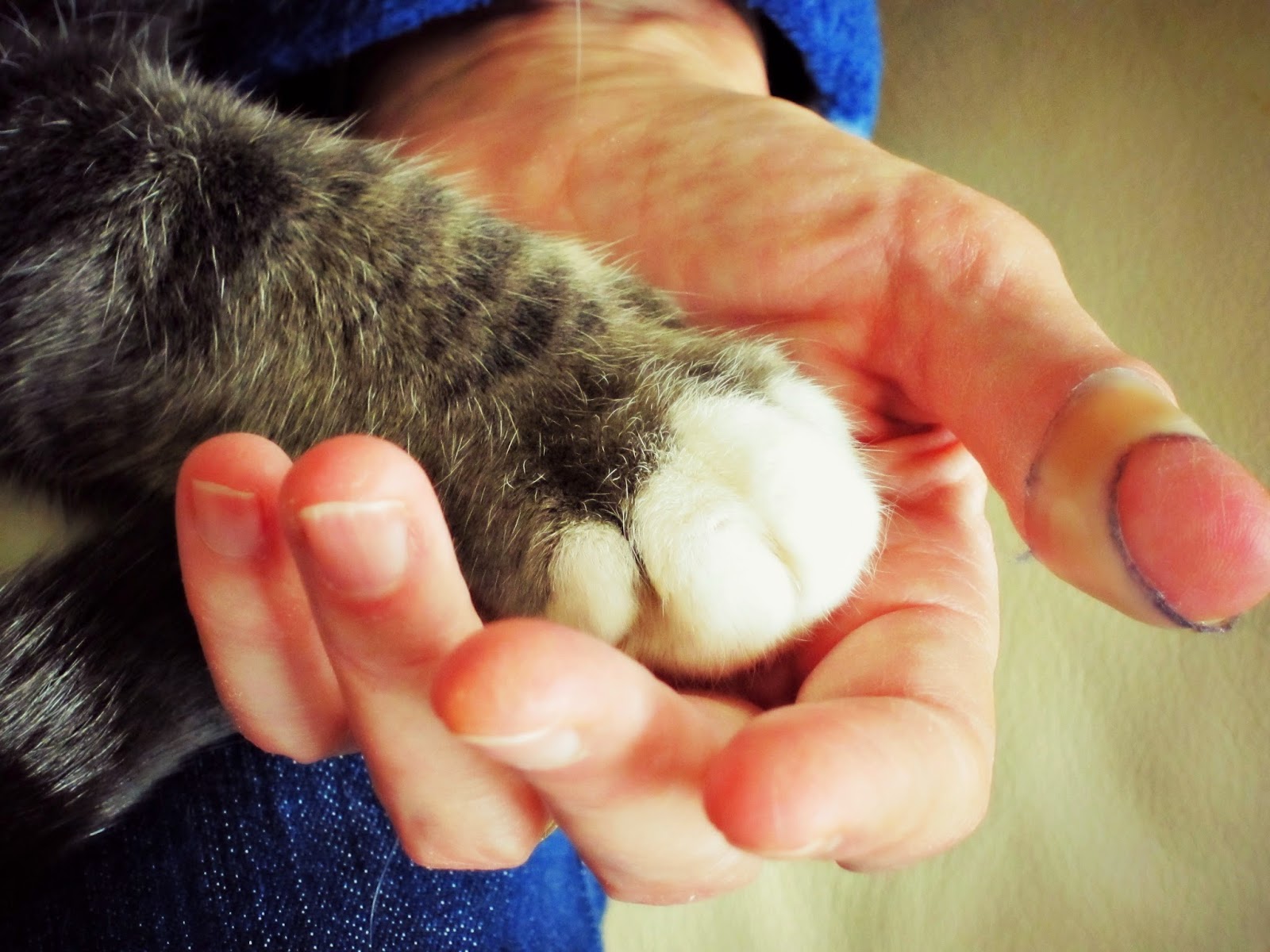 Tom needed Lucky, and Lucky  ... was destined to be with Tom.  Lucky had truly found his home.