A word to the wise ... check your grocery store bagged salad mixes. This is what I found in the bag! 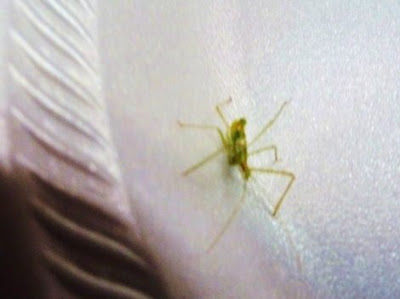 And it bit me! 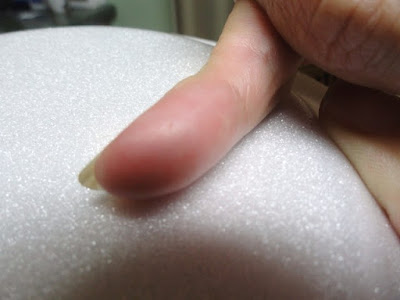 If you look closely you can see a tiny puncture wound in my finger.

Simply, I had opened a bag of salad mix (purchased at a major retail chain) and suddenly felt a strong stinging sensation in one of the fingers on my left hand. Immediately, I dropped the bag of salad onto the kitchen counter and furiously brushed at my fingers. 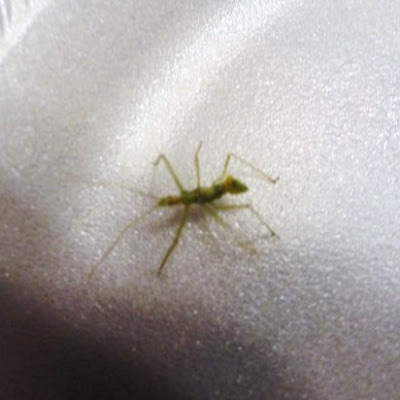 At first glance I thought I'd just brushed off just a bit of wilted lettuce onto the counter. Then when I glanced down and I saw  the "lettuce" move, I became a bit freaked out to say the least. My hubby rushed into the kitchen when he heard me yelling, "It bit me ... it bit me!" I quickly ran my hands under cold water and he brought me some peroxide to disinfect the area where I'd been bit. In all the confusion I didn't realize he had trapped the insect with a clear plastic cup. So of course, I took a few photos.

For the next few hours I kept an eye on my finger. Thankfully, there was very little swelling and the pain subsided. Later that evening I did some research on the Net regarding my new little "friend". I looked up "bugs and produce" and I'm fairly certain that I was stung by an insect known as an Assassin Bug. From the photos I'd looked at, this insect was probably a nymph. Surprisingly, they are very beneficial predatory insects, but they can inflict a painful sting, similar to a bee sting, on an unsuspecting human.  They are found worldwide.

And what became of this little assassin ... ?  Both it and the salad went into the trash!