Growing Moonflowers In The Poconos

For the longest time I had wanted to grow Moonflowers. So ... this year I decided to try. Moonflowers are vining plants with 6 inch, pure white flowers which open after dusk and stay open all night long. They slowly begin to wither with the morning light. 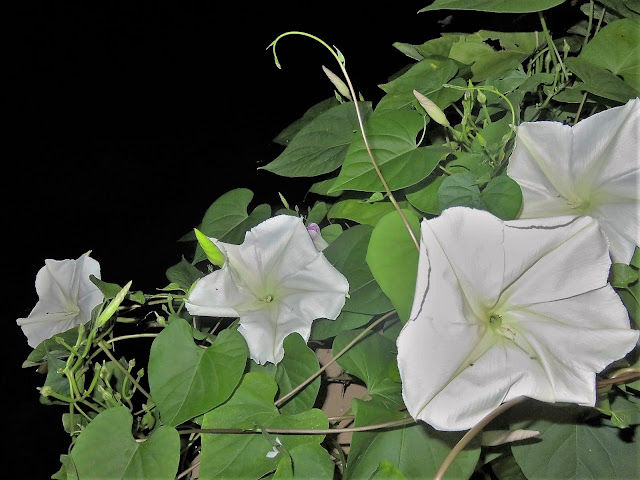 In warm climates moonflowers are tender perennials. In our cold mountain region, they are late summer blooming annuals. So the seeds are best started indoors. I wish I'd taken a photo of the seeds to show you. As a simple comparison, they kind of look like feed corn kernels, only a bit larger.  Since I would need to start them about 4 weeks before moving them outdoors, I planted the seeds indoors in 3 inch peat pots on April 3rd. Because moonflower seeds have a rather hard seed coat, I first nicked the seeds with a nail clipper and then soaked them in a water/peroxide mixture for about 36 hours before planting. 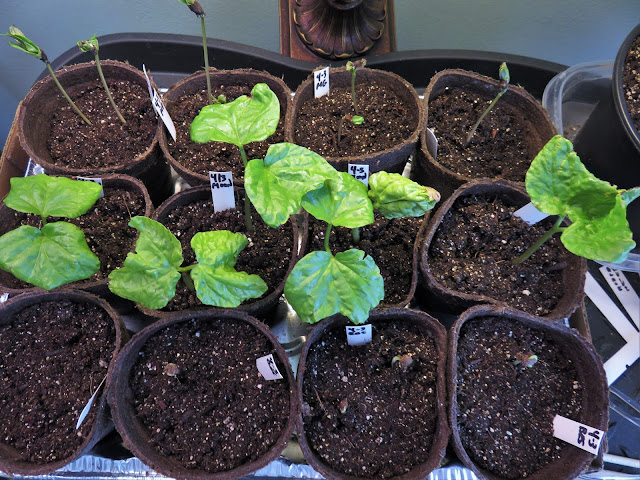 It's now April 14th. The moonflowers are the young seedlings pictured in the center row. In the back row are Heavenly Blue Morning Glories. Black-eyed Susan Vine seeds are just starting to push through the soil in the front row. By mid-May all the seedlings were large enough to move outside to begin hardening off for a period of about 10 days. 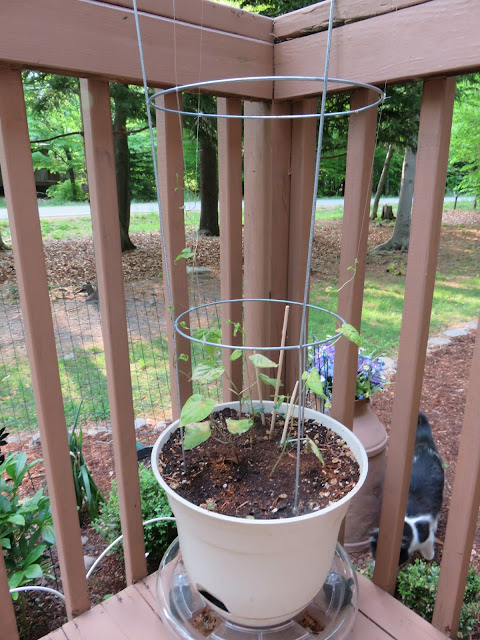 May 26th. Deer are a major problem where I live, so I grow many of my plants in pots to keep them out of their reach. Since I didn't have a tall trellis for my moonflowers to climb, I improvised and used a tomato cage instead. For extra climbing supports, I attached additional strands of fishing line to the framework of the cage. A day or so later, I also added some indoor sown Heavenly Blue Morning Glory seedlings to the pot. 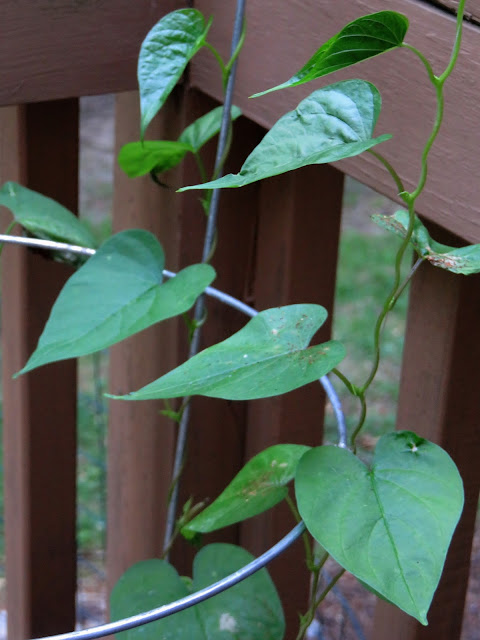 It's now a month later, June 26th. The vines have definitely grown. Since there are Heavenly Blue Morning Glories also planted in the pot with the Moonflowers, I really can't tell which is which right now. 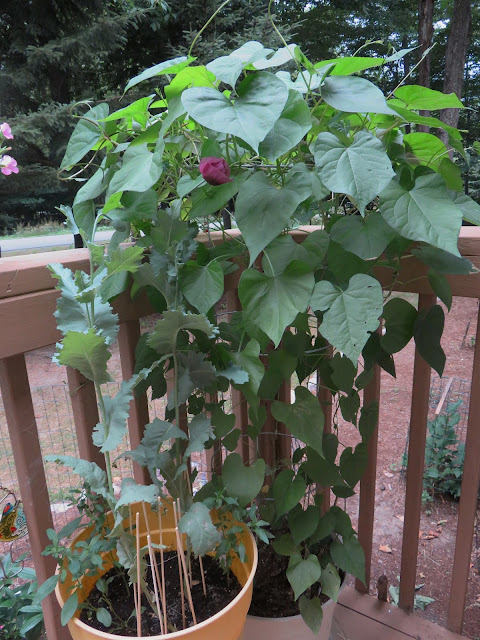 July 28th.  The vines are beginning to climb over the top of the tomato cage now. The purple flower in the yellow pot is a poppy, Lauren's Grape. I tend to group a lot of  different flowerpots on my front porch. 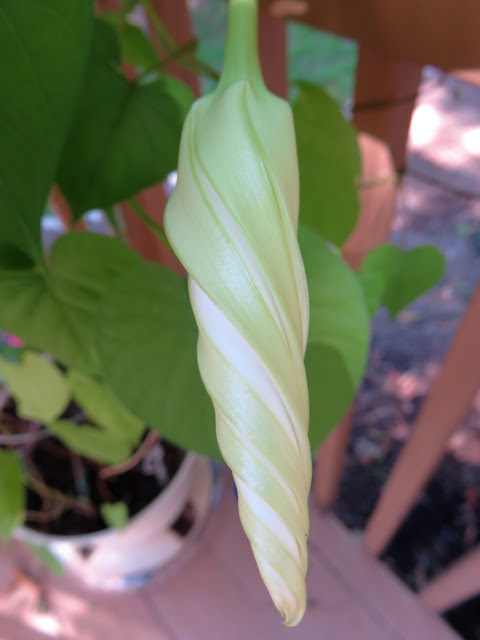 Later the same day. August 26th ... There is another Moonflower bud on the vine that is about to open. 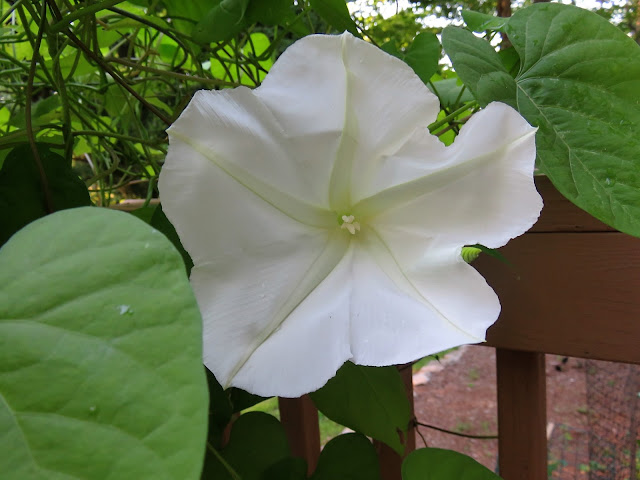 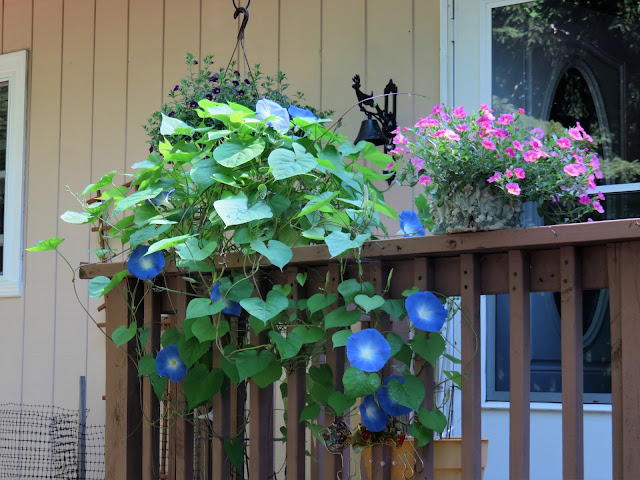 Who could ask for more? Heavenly Blue Morning Glories to welcome the day. 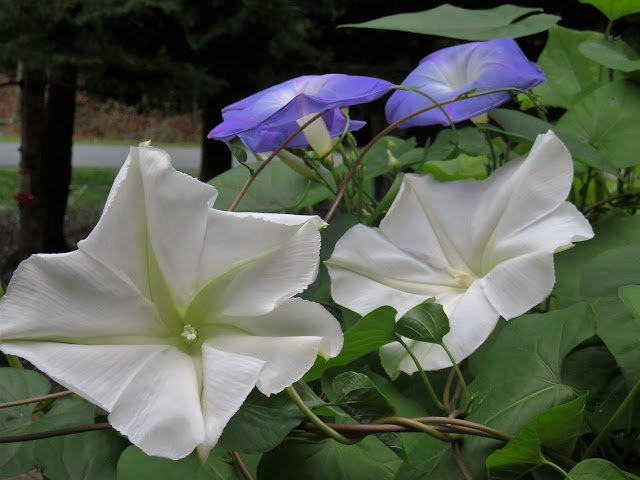 And gorgeous Moonflowers to brighten the onset of evening!
Posted by Jane Rutkowski at Sunday, September 18, 2016