Surprises In My Rainy Pocono Mountain Garden In July 2018

Rain, rain, go away.  Come back ...  in late August ... when things are usually bone dry. Right now my gardens are somewhat waterlogged and the slugs are having a field day! Bleh!  I am handling the situation as creatively as I can  ... and I'm kind of surprised by some of the results. 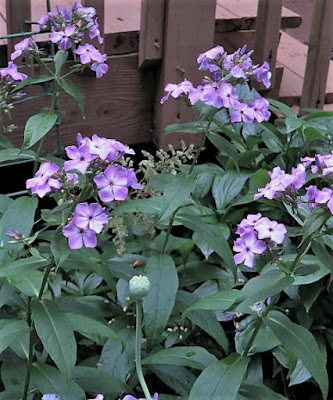 In my front garden, my tall garden Phlox are, surprisingly, doing very well. Not much slug damage, considering. Before the deluge, I had been putting out recycled cat food cans filled with beer and successfully drowning the buggers. When the rains came, the beer trick no longer worked. So, I switched to granular slug bait. Works just fine. Been using it in all my gardens. 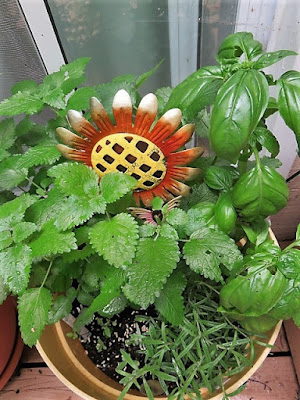 Flower pots can be a different story. With my herb pot (Lemon Balm, Rosemary & Basil) when the rains came I began noticing slug damage. So, I sprinkled granular slug bait on the soil surface and moved the pot close to my sliding glass door off my back deck. Now being under an overhang, the pot no longer gets drenched. Although the plants are not getting the bright, dry sunshine they would like, the sun will shine again. That's when I will move them back to the sunny side of the back deck.  Summer is far from over! 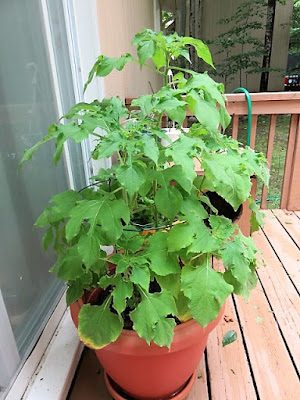 I also moved my pot of Mexican Sunflowers over there, too. No flowers yet, but they are late bloomers. I don't normally have flowers til the end of August, but they are so worth waiting for! 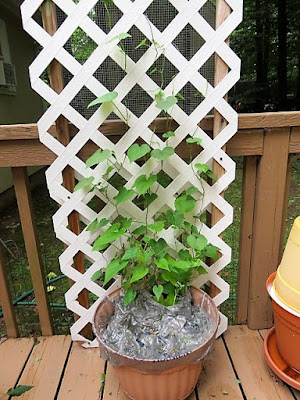 Slowly climbing up a trellis on my back deck is also a combo of Grandpa Ott Morning Glories & Moonflowers. Since the pair take their sweet time, I started them indoors in May and planted them out in June. Although they really don't get going til late August, they usually never fail to bloom their pretty little heads off! Just hope we have a lot of sun and heat return in the next few weeks to make them happy!  Oh, almost forgot ... 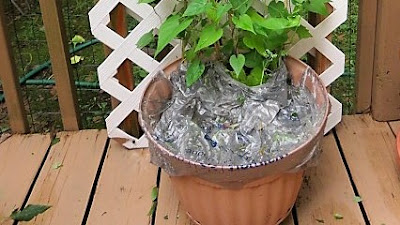 with my flower pots that can't be moved, or really can't be covered with an empty pot or whatever, I improvised and covered the base of the plants with loosely packed plastic bags from the supermarket. Sort of a "raincoat" for the plants. Surprisingly, it really does help.

On a different, but another really positive note, sometimes plants will behave in ways you wouldn't expect. 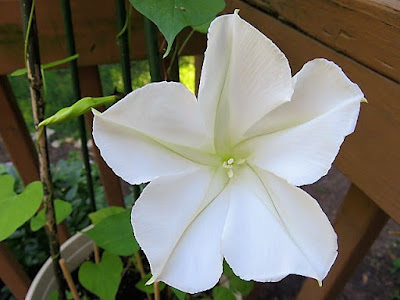 On my front deck, I also have a trellis planted with Moonflowers, but with them, I planted Heavenly blue Morning Glories instead of Grandpa Ott's. I had started them both indoors as well. In the last week, I have had two Moonflowers bloom already. I was initially surprised when I saw them forming buds so early in the season. Must have been the mini heat spell  of about 4 days we had in June. Anyway, the first one bloomed about 2 in the afternoon on a cloudy, dreary, misty day.  The second, bloomed a few days later. The Heavenly Blues haven't even started forming buds, yet. Go figure. They will ... eventually. What can I say? I am thankful for small miracles.

Happy Gardening to all!
Posted by Jane Rutkowski at Thursday, July 26, 2018